Permanent Observer
Mission of the Holy See to the UN

Rev. Roger Landry works for the Holy See’s Permanent Observer Mission to the United Nations in New York. Ordained a priest of the Diocese of Fall River, Massachusetts, in 1999, he is the former pastor of St. Bernadette Parish (2012-2015) in Fall River and of St. Anthony of Padua Parish (2005-2012) in New Bedford, MA, and the former executive editor of The Anchor, the weekly newspaper of the Diocese of Fall River (2005-2012). He is an alumnus of Harvard College and the Pontifical North American College in Rome. He was an on-site commentator for EWTN’s coverage of the 2013 papal conclave that elected Pope Francis, appears often on various Catholic radio programs, is national chaplain for Catholic Voices USA, and is the chaplain for the New York Chapter of the Leonine Forum. He regularly leads pilgrimages to Rome, the Holy Land, Christian Europe and other sacred destinations and preaches several retreats a year for priests, seminarians, religious and lay faithful. He writes for many Catholic publications and is the author of the 2018 book Plan of Life: Habits to Help You Grow Closer to God. 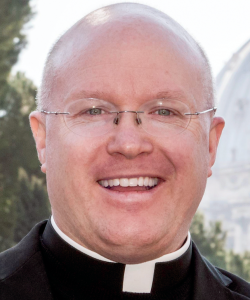