Fighting the Leviathan from Within

Leviathan is a Biblical sea serpent, mentioned in the Book of Job, but it is also a metaphor to the State, according to Thomas Hobbes in his book “Leviathan”. Referring to the State, Brazil is one of the countries with the largest wage bills relative to total central government expenditure.

Besides being large and ubiquitous, the Brazilian State has historically been a vehicle of social upward mobility for civil servants, politicians and military staff. The political structure has been associated with patrimonialism, which is, in political language, the use of public resources for private enterprises and interests. This drainage of State resources for private purposes is a pervasive process in Brazil.

Classical liberal think tank Instituto Millenium has pointed out that in 2019 the amount spent with civil servants was in the ballpark of R$ 930 billion, which means that roughly 13,7% of Brazil’s GDP was destined to cover Government staff and personnel costs, vis-à-vis 6% destined to education and 3,9% to health expenditures.

Considering the context presented above, the lecture exposes the size of the State in Brazil, which I call the Leviathan, the privileges public servants and Congressmen have, the challenges and difficulties of fighting patrimonialism and the ways I and the Free Market Caucus have found to combat it.

Federal Representative
State of Rio Grande do Sul in Brasília 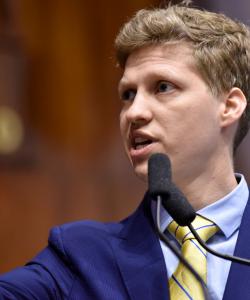