Born in North Korea, human rights activist and TED Speaker Yeonmi Park grew up in a punishing society devoted to the worship of Kim Jong-Il. But at the age of 13, she and her family made a daring escape to China in search of a life free of tyranny. In her viral talks, viewed online nearly 350 million times, Park urges audiences to recognize—and resist—the oppression that exists in North Korea, and around the world.

Growing up in Hyesan, North Korea, it was normal for Yeonmi Park to see dead bodies as she walked to school, and to be so hungry that she ate wild plants. After watching a pirated copy of Titanic, the veil of tyranny began to fall. Having caught a glimpse of a free world, Park realized that her experience of life wasn’t the only one—and that she might one day find a way out. In 2002, Park’s family suffered a crucial blow when her father was arrested and sent to a prison camp for engaging in “illegal trading”—selling materials that no one would be punished for in a free society. In 2007, Park’s sister escaped with a friend before she and her mother followed her to China. But before they could locate her, Park and her mother were sold separately to Chinese human traffickers. In 2009, Park and her mother crossed the Gobi desert to Mongolia from China in -40 degree weather, finding their freedom in South Korea. She recounts this incredible story in her searing memoir In Order to Live: A North Korean Girl’s Journey to Freedom, and in the insightful, moving talks based on her experiences.

An insightful and candid speaker, Park is fast becoming a leading voice of oppressed people around the world. At the Oslo Freedom Forum and the One Young World Summit in Dublin, she became an international phenomenon, delivering passionate and deeply personal speeches about the brutality of the North Korean regime. Her address to One Young World on the horrors of detention camps, political executions, and sex trafficking was viewed over 320 million times. The BBC named Park one of its "Top 100 Global Women." 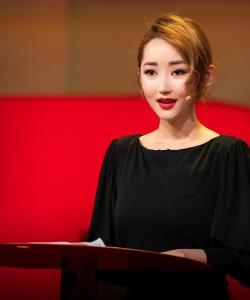