Sal Khan is the founder and CEO of Khan Academy, a nonprofit organization with a mission to provide a free, world-class education for anyone, anywhere. He is also the founder of Khan Lab School, a nonprofit laboratory school in Mountain View, California, and Schoolhouse.world, a new nonprofit started during the pandemic that offers free tutoring.

Sal’s interest in education began while he was an undergraduate at MIT. While there, he developed math software for children with ADHD and tutored fourth- and seventh-grade public school students in Boston. Sal also taught test prep courses for the MCAT and was named Teacher of the Year by a national test prep company. He holds three degrees from MIT and an MBA from Harvard Business School.

Sal founded Khan Academy as a 501(c)(3) nonprofit organization in 2008. Khan Academy’s platform includes more than 70,000 practice problems as well as videos and articles that cover a range of K–12 subjects. Khan Academy’s learning system is mastery based, which allows students to master key concepts at a pace that’s right for them before moving on to more challenging content. The organization partners with school districts across the country and around the world that serve students who are historically under-resourced. In the United States, school districts use Khan Academy Districts and MAP Accelerator to help teachers differentiate instruction. Nearly 20 million learners use Khan Academy every month in 190 countries and 46 languages.

Sal has been profiled by 60 Minutes, featured on the cover of Forbes, and recognized as one of TIME’s 100 Most Influential People in the World. In his book, The One World Schoolhouse, Sal outlines his vision for the future of education. The ideas in One World are the basis for Khan Lab School.

Sal lives in Mountain View, California, with his wife and three children. 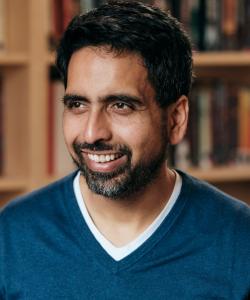