Rev. Robert A. Sirico is the president emeritus and co-founder of the Acton Institute, and pastor emeritus of Sacred Heart of Jesus parish in Grand Rapids, Mich. His writings on religious, political, economic, and social matters are published in a variety of journals, including: the New York Times, the Wall Street Journal, Forbes, the London Financial Times, the Washington Times, The Detroit News, and National Review. Rev. Sirico is often called upon by members of the broadcast media for statements regarding economics, civil rights, and issues of religious concern, and has provided commentary for CNN, ABC, the BBC, NPR, and CBS's 60 Minutes, among others. He is the author of numerous books, including Defending the Free Market: The Moral Case for a Free Economy, A Moral Basis for Liberty, and the forthcoming The Economics of the Parables, due for release in May 2022. Rev. Sirico holds dual Italian and American citizenship. 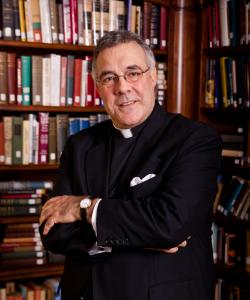