Kishore Jayabalan is currently chairman of the Commission on Catholic Social Teaching for the diocese of Lansing. From 2005 to 2019, he was director of Istituto Acton, the Rome office of the Acton Institute. He previously served as a staff member of the Vatican’s Pontifical Council for Justice and Peace, a diplomatic attaché for the Permanent Observer Mission of the Holy See to the United Nations in New York, and an international economist for the U.S. Bureau of Labor Statistics in Washington, D.C. He has a B.A. in political science and economics from the University of Michigan, Ann Arbor, and a M.A. in political science from the University of Toronto.

A native of Flint, Mich., where he attended Catholic schools, Kishore was baptized and received into the Catholic Church by Pope St. John Paul II in St. Peter’s Basilica in 1996. 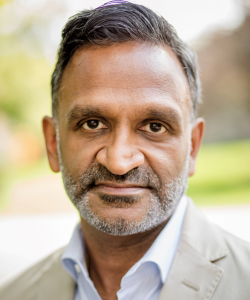