John D. Wilsey is associate professor of church history and philosophy at The Southern Baptist Theological Seminary in Louisville, Kentucky. He is the author of three books on the history of American national identity and religion in public life: One Nation Under God: An Evangelical Critique of Christian America (Pickwick, 2011), American Exceptionalism and Civil Religion: Reassessing the History of an Idea (IVP Academic, 2015), and God's Cold Warrior: The Life and Faith of John Foster Dulles (Eerdmans, 2021). He is also the editor of Democracy in America: A New Abridgment for Students (Lexham, 2016), Alexis de Tocqueville's classic two-volume study of American institutions and culture.

Professor Wilsey was 2017-18 William E. Simon Visiting Fellow in Religion and Public Life with the James Madison Program in American Ideals and Institutions at Princeton University and is a research fellow with the Center for Religion, Culture & Democracy. 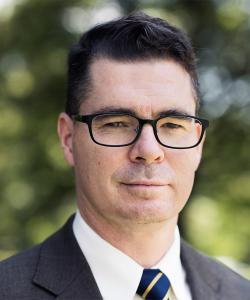 Alexis de Tocqueville: The Man and His Times | Course | Figures & Traditions
What Is Conservatism? | Course | Politics