Father Raymond J. de Souza, 50, was ordained a Catholic priest on July 20, 2002, for the archdiocese of Kingston, Ontario. He is currently the pastor of Holy Cross parish in Kemptville, near Ottawa. He served as chaplain at Newman House (2004-22), the Roman Catholic chaplaincy at Queen’s University in Kingston, Ontario, while also serving as the pastor of Sacred Heart of Mary Parish (2006-22) on Wolfe Island—the largest of the Thousand Islands in the St. Lawrence River.

Since 2014 he has served on the board of directors of Catholic Christian Outreach, the leading campus evangelization movement in Canada. In 2019 he became chairman of the CCO board.

Father de Souza is also a senior fellow for Cardus, Canada’s leading Christian think tank, and a senior fellow at Massey College, University of Toronto. In addition, he is a lecturer in the Queen’s University Economics Department, where he teaches a senior seminar in philosophy and economics. He also served 15 seasons as chaplain for the Queen’s Golden Gaels football team.

From 2005 until 2009, he served as editor of Religion & Liberty, published by the Acton Institute. In 2011 he launched Convivium, a new Canadian magazine examining the role of faith in our common life. He served as editor-in-chief until 2020.

It should be noted that Father de Souza is an avid indoorsman. 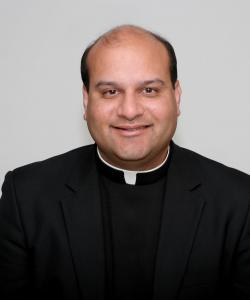