Elisabeth “Betsy” DeVos is a proven leader, an innovator, a disruptor and an advocate. In education, in business and in politics, Betsy has been a pioneer in fighting to remove barriers, to enact change and to create environments where people have the opportunity to thrive.

Betsy DeVos is the former Chairman of The Windquest Group, a privately held investment and management firm based in Michigan with a diversified consumer product and service portfolio.

Active in politics for more than 35 years, Betsy was elected chairman of the Michigan Republican Party four times, and she has served in numerous leadership roles with campaigns, party organizations, and political action committees. Today, her political efforts are focused on advancing educational choices.

Betsy is a pioneer in fighting to remove barriers, enact change and create environments where people have the opportunity to thrive.

Betsy is also active in her community. She is the former chair of both the American Federation for Children and The Philanthropy Roundtable board of directors and served on a number of other national and local boards including ArtPrize, American Enterprise Institute, Foundation for Excellence in Education, and the DeVos Institute for Arts Management at the University of Maryland.

Betsy is married to entrepreneur, philanthropist and community activist Dick DeVos, and together, they have four children and five grandchildren. 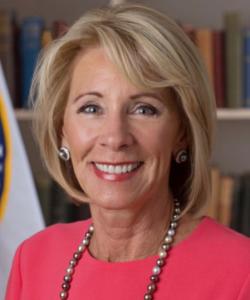